I want to tell you more. The other conversations I had, the follow-ups, the mystery chef, the Polish supervisor who felt so humiliated by her work that she'd stopped telling her friends and family back home what she was doing, still cleaning, still below the London Living Wage, five years on..

More about sitting alone in the canteen and withdrawing, feeling the silence and isolation and being too exhausted to speak.

Falling asleep out with friends at pub tables. Turbo coffee in the morning followed by too much sugar....How hand cream is vital, how you can never change any bedsheets or clean anything at home without having flashbacks of what you've been doing over a dozen times a day and slipping into automatic...getting thin..getting out of touch with news..unable to read...sleeping on the tube...backache....dreaming about getting out of this...

I know how to organise. But it's difficult. There are some easy aspects to remember though, for all of you reading this and wanting to change your situation at work.

But above all, the first steps are this: 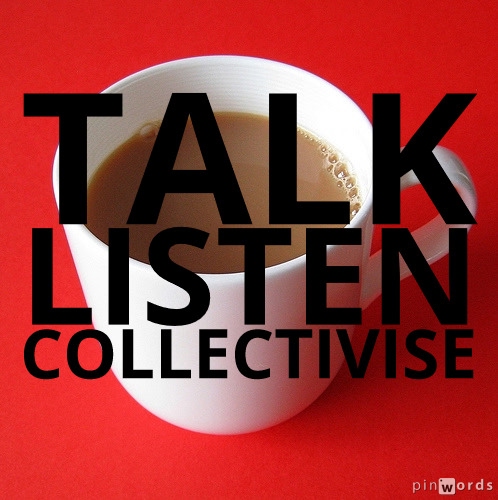 Talk – You need to talk to people. You need to break the ice, break the isolation. There is a misguided view that we can organise through social media. Social media is an amplifier rather than an instigator. Most of us, as we know, are not on twitter! It's a privileged medium for those with smartphones and the time to look at them. I know we don't when we're rushing all over rooms, often with no reception or wifi. To be 'plugged in' to that speed-network, you need the time and tools to scan it, work it and benefit from it. You can strike up a conversation at reception (carefully), in the kitchen, on break, in the smoking area, in the locker room, in the lift. Anywhere you have time to see each other. Share a tea. Tea is one of the greatest social lubricants of all time! Revolutions are plotted over cuppas...

Listen – This is the big one. The most important part of any organising. After striking up conversations, we need to listen to what people have to say. It's common to want to vent, to go on and fill silence, but, we need to hear from people. We know it's rare for us to really share our feelings and our ideas about work and whether we can change our situation. But that process starts with hearing each other out. How are we doing?....And remember what people tell you, remember it because you'll hear the same issues from many different people and we need to recognise and reflect what we've got in common.

Collectivise – Nine times out of ten if you're feeling it, someone else is too. If it's your problem, it's a shared problem. The same problems repeat themselves, because they are un-addressed, because they are products of exploitation and oppressive behaviour, and unresolved they soon become systemic and structural and cultural. Like bullying, stress, pressure, low pay, self-cut as well as management cut breaks, unpaid overtime. These unfair conditions become normalised. 'That's just how it is' we tell ourselves and the intensity of our work exhausts and isolates us. 'It'll never change' we think.

But it can. And it does (remember New York). Especially when we work for some of the wealthiest, most profitable and constant companies in the world. They need us. Remember that. We make their money. We make the operation tick over. It's common for people to focus on their own individual issues and problems because our dominant culture teaches us we're alone. Mass individualism means we've lost the ability to think and act and take decisions collectively. We need to re-learn collective action but it is natural, co-operation is the cornerstone of society, and contrary to Thatcher's assertion that there is no such thing as society, only the individual, we are social. Take a problem it, share it. Got an individual grievance? Collectivise it. See and feel that you're in it together. Act together. Support each other. Stick together. That's a union.

So, as I keep on cleaning, agitating, and organising (: I want to give this space over to other people, working for the same hotel, as well as in the same hotel chain, in Housekeeping as well as other departments to take up their voice.

This 'aint my last word. I'm stepping back to let my colleagues step in. Stay with us. We're stepping it up....

So who is it? Who have I been working for?

Well, the company is called Omni Facilities Management. This is a contract cleaning company, registered in the UK, currently operating across 150 hotels in the UK and Singapore. Omni have a presence in some of London's top hotels including global powerhouses like Hilton.

Established in 1980, it's been running for 36 years. Last year's gross profits were £4,076,131. The company says it employs 4000 people – over 2000 of those on direct contracts. Employment would suggest a relationship of mutual obligation, in fact for many the relationship is one of being employed on a virtually zero hours contract, as in my case, a four hour per week contract. I'm guaranteed just £26* wages by Omni per week.

But this isn't the only problematic part of the contract. There is an unlawful clause (depicted below) which states that the first two weeks of work are 'training' and are unpaid if an employee leaves before 3 months are up. This means that hundreds of pounds of wages which are owed to workers, are unpaid. Workers are not getting the minimum wage for the hours they've worked – a violation of the law.

The rogue clause - and below, typed in:


Training: The first 2 weeks of your employment are dedicated and designated ‘Training weeks’ as or Client hotels require trained team members. Payment for this training will be paid when you leave our employment however, should you voluntarily leave within the first 12 weeks, the company reserves the right to charge you the equivalent cost of providing this transferable, job specific training. The company may, within your first pay cycle, at its discretion pay you a salary advance subject to certain qualifying criteria and based on assessed competence and capability. Any advance will be deducted from your subsequent salary.

I pointed this out to Omni and they told me I had signed the contract and had therefore consented to carrying out unpaid work for the company, despite cleaning to a good standard, carrying out spring cleans and meeting my quota of rooms per day.

Given that the staff turnover in Housekeeping Departments is about 50% - I.e half of all new starters leave within a few months, and taking into account those who take the job over a summer period and are unable to fulfil the three month period imposed by Omni - there could be thousands of workers out there who are owed substantial amounts of cash by this company.

Most Housekeeping Department workers do not speak English as a first language, with many unable to speak English at all. They are not given the Employee Handbook or their contract in their first language, which means they often don't know what they've signed and what it means for their wages and conditions. Most are likely to accept the explanation given by the company as to why they will not be paid or have not been paid for work they have done, as part of this 'training period'.

Agencies taking over from the Omni contract also end up taking on this liability, meaning they could be subject to claims by workers who have been shafted by Omni but will now need to be paid out by their new agency.

Omni Facilities have questions to answer over their contractual clause which blatantly violates employment law. You work – you get paid, End Of. A two week 'training period' can see the company pocketing some £480 per worker for two five-day weeks of labour.

They justify this as the cost of providing the training, This 'training' consists of cleaning rooms with and alongside experienced workers who lead by example, but they don't get any extra pay for providing this 'training'. Their load is just a little bit lighter. The training also consists of just 3 days of shadowing, so the two week period is also questionable. 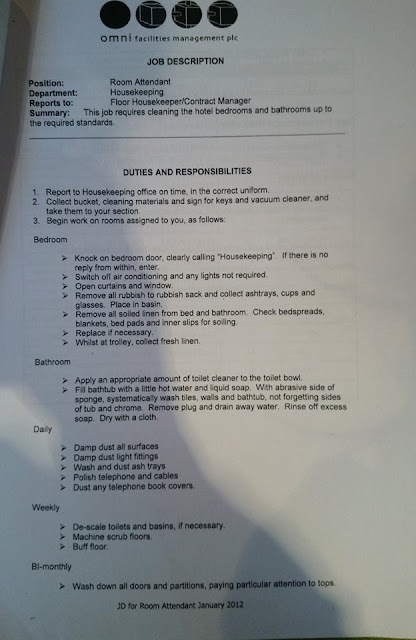 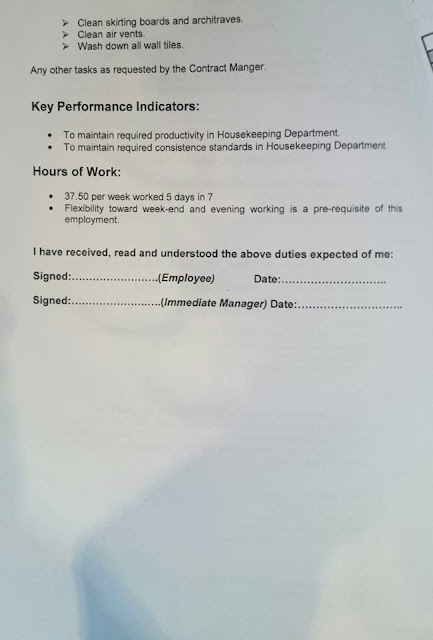 What I have to do

Looking through Omni's website, they try to present themselves as a 'good corporate citizen' as all these Housekeeping agencies do, sponsoring vocational training and pledging to 'revolutionise hotel housekeeping...through leading software'.

What will revolutionise this industry and this sector, isn't going to be new software, it'll be seeing the back of Omni and other agencies whose sole purpose is to profit from ever higher 'productivity' quotas (making mostly women migrant workers work harder and faster, faster and harder, at a great cost to their physical and mental and health and well being). Our labour is their grist. They do not add any value themselves to business, we are the business, and we do it all for minimum wage – and up to two weeks for free! Whilst some of the most profitable companies in the world wash their hands of us.

Hotels should guarantee a living wage, as well as stable and decent terms and conditions by employing us directly and eliminating this strata of competitive companies tendering on how much more labour they can squeeze out of us - an ever more desperate workforce.

Agencies are supposed to exist only to cover and peaks and troughs in labour supply, not to keep us all on permanent zero hours contracts and constant precarity.

But I'm not looking for anyone to save me.

Omni are a shambles. But they are not alone in the shark pool. We know public opinion is on our side about the need for highly profitable companies to pay the living wage and ensure fair, humane and healthy conditions for all workers.

The question is, when will the the hotel chains wake up and smell the R2, and clean up this industry? The answer is when we, self organised and unionised, force them to.

* Originally this figure was £24 per week. The correct figure based on the Minimum Wage is actually £26. This is down to author error. Apologies for any confusion caused.
Posted by Maid in London at 07:32 18 comments: